This image stirs up so many emotions. I have so many thoughts on The Dark Knight Returns (henceforth referred to as DKR) that I don’t know where to start. While this was not my first Batman, it was the first Batman I read that changed EVERYthing. This is a book that I have re-read multiple times only to learn something new up completion. I need you to understand what I just said. I’m learning life lessons from a comic book. Take it in, make your judgments, let’s move forward.

I’ll start this section with the words “Nazi Nipples” and I promise that if you haven’t read DKR it’ll make sense in a few hundred words. I grew up watching what is now called Batman ’66. This is the television serious starring Adam West as Batman, Burt Ward as Robin the Boy wonder, Julie Newmar as Catwoman, Cesar Romero as The Joker, Frank Gorshin as The Riddler, and Burgess Merideth as The Penguin (also famously known as “Mick” from the Rocky movies). There was a handful of other actors and actresses as well, but I’m too lazy to google them at the moment. Now, Batman ’66 has been ridiculed for being campy, but I don’t care what you think, that was my first Batman and I loved it. Now, imagine my 5-year-old brain when Tim Burton’s movie Batman came out. I was still young and didn’t really understand what was happening, I just knew there was a movie, it had The Joker, it was dark and metal, and I loved it. Every minute of it. That remained my one true Batman for years to come. There were sequels and offshoots, but that movie, that was it. Batman as good as he could be.

Little did I know a mere six months after my birth in February of 1986 the world of Batman changed. I, as a six-month-old succubus of society, had no idea. Enter The Dark Knight Returns. I didn’t find DKR for another 10-11 years after its debut, but it was well worth the wait. I don’t know if my child mind would have been able to comprehend everything that it needed to in order to appreciate the art that was written, drawn, and inked on those pages. Again, “Nazi Nipples.”

There’s nothing I can say that will do DKR justice. My take is also my own and may be way off base compared to other’s interpretations. That’s the beauty of fiction though. I’m allowed to take a piece of art and take from it what I want. Have it mean something to me. This is a story of a man with a passion so deep, a love so deep, even when age comes to take her claim, she’s punched in the neck and told: “not today Satan, not today.” A passion for justice and righteousness, a love for a city you call home.

The nature of this story took Batman ’66 and turned it on its head. There was no “boom,” “pow,” or “crack” anywhere to be seen. There was blood, Nazi Nipples, and cursing. You have a 55-year-old Bruce Wayne who has given up his mantle of Batman due to the death of Jason Todd. A now middle-aged Wayne sits back and watches his city as it gets overrun by gangs with no respect for the law. You’re taken on a ride where Bruce Wayne takes up the mantle of Batman and faces old foes and punches them in the face with Justice. (capital J intentional). You get to see Batman take on Harvey Dent/Two-Face, The Mutant Leader, and the Joker. *SPOILERS* The last part of the story ends with a face-off between Batman and Superman. 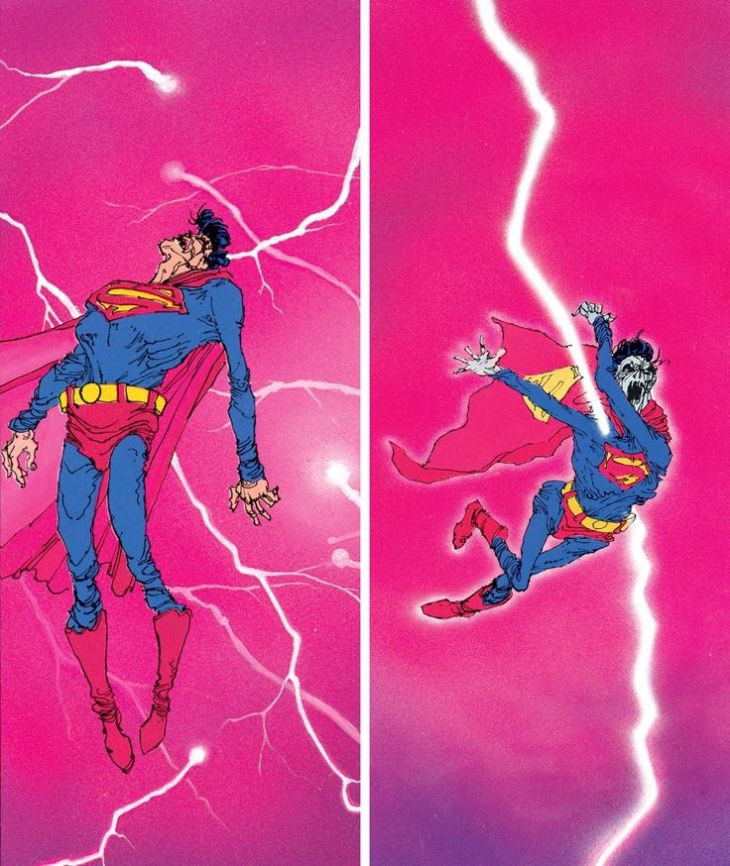 There’s even Superman suffering from radiation poisoning! That has nothing to do with the face-off between The Son of Krypton and The World’s Greatest Detective. NOTHING!!! Are you starting to understand why this comic book is so epic?

So here is where things get better. This story is considered by many the seminal Batman work. Then they went and made it better. No, I’m not talking about the DKR II, or DKR III. I’m referring to the fact that they made The Dark Knight Returns into a two-part animated film. WHAT?!?!? Yes, they did. If you aren’t sold yet on one of the best comics of all time being made into a movie, (I don’t even know why you’re reading this or how you got here), it gets better. Peter Weller is the voice of Bruce Wayne/Batman. If you don’t know his name, that’s fine, because you’ve most likely heard/seen this man. Peter Weller is the man who played Robocop. Again, let your mind take all of this in. Two childhood powerhouses, Batman and Robocop, in ONE being. It’s so good, you’ll wonder why you kept reading this and didn’t just start watching it now. Seriously, go. I’m going to stop here and go watch it myself.

These are just the rantings of a man who loves Batman and doesn’t write very well, but I hope you can understand my passion for the character and how important this story is to me. You get to see a man who has endured life in order to make it better for others. His passion for justice is so strong, not even old age can get in his way. He faces opponents faster and stronger than him, tastes defeat and goes back to the drawing board. He remains humble and pushes himself to be better. Outthinks he enemies even when they’re better on paper. I can’t think of better lessons to learn as a child and really internalize.

As silly as it sounds, this story has helped me frame my outlook on life in several ways. When I’m facing a problem I can’t get passed I can go back to the drawing board, reload, engage, and go out on the attack. The best part is, I get to stare that problem right in the eyes and say the following:

If you’d like to get your hands on a copy of The Dark Knight Returns I suggest you visit your local comic shop and tell them I sent you. They won’t know who I am, but tell them all the same. Support your local businesses and invest in your community.

If you absolutely can’t make it out of your home or don’t have a local shop check out the following links: here for the book, and here for the film. Each has its own perks. The main perk of the book is that you get to read/hear all of Batman’s internal dialogue which the film leaves out but still manages to make the story work.